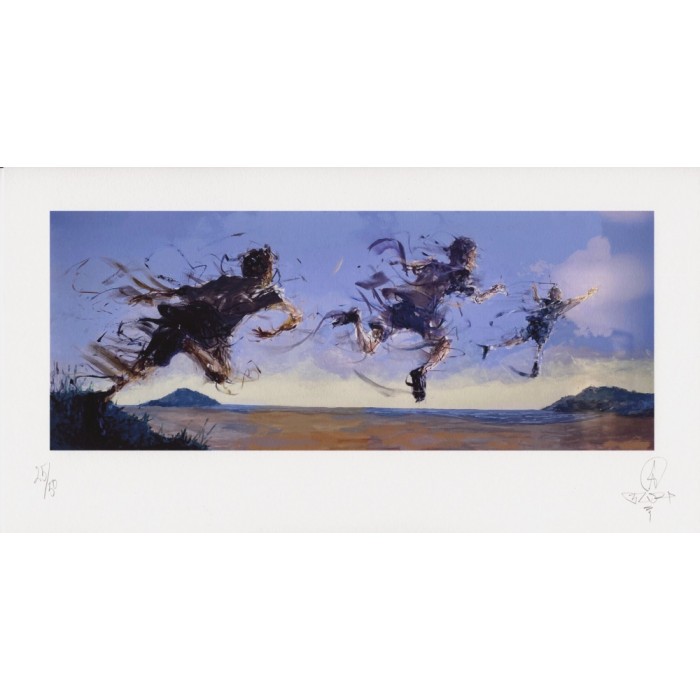 Limited edition on paper numbered out of 50 and signed in pencil by the artist.
Technique of digigraphy.
Dimensions with margins 16x30 cm
Creation date: 2022.

It was in 2020, during this period of imposed retrenchment, that I had the chance to be welcomed in artistic residence on the old port of Saint-Trojans-Les-Bains, on the island of Oléron.
In search of a symbolic painting…
The representation of successive states of the self in motion. Freedom, discovery, fulfillment, diving into a landscape: Spirituality
The old dream of Man to fly like Icarus, not towards the external sun - to burn his wings - but rather towards that of the interior, search for a global balance: Introspection
Man is too often dissociated from Nature. Is he part of the latter, is she part of him? Philosophy
Exploring the ‘I’ for a Better ‘We’: Hope
This series allowed me to explore personal feelings and to express them pictorially.
Inspired by surrealism, these works are an invitation to reflection, a questioning of my thoughts on the nature of man today.
Alexis “Bust“ STEPHENS aka Bust The Drip

Alexis Bust Stephens, known as Bust The Drip, is a French artist born in 1983.

He comes from a crossbreeding between France and Jamaica. Her childhood was multicultural, multilingual, bathed in music and dance in the suburbs of Paris.

Very early on he trained in hip hop, a discipline he still practices professionally and which takes him to the four corners of France and abroad for meetings and festivals.

It is the vibrations of the music that animate it. It is from them that the painting started.

During his competitions, between two dances, he begins by drawing the vibrations of the sound coming out of a sound system. Then, these vibrations became bodies. He transcribes the movements of the dancers in lines and volutes, the bodies twist, stretch, swirl, lengthen under his eyes and under his pencil stroke.

He takes pleasure in it, and, in secret, refines his art, this budding passion. He doesn't dare show it yet, talk about it.

Among his friends, street artists squat in disused places in the suburbs to paint and practice. Supported by their encouragement, He does not take long to join them. Bust The Drip creates his first frescoes and enters the world of urban art. He joined a multidisciplinary crew, the Bang Crew, of which he is still a part.

Recreating the movement of bodies, Bust The Drip associates the gesture with the projection of paint. Inspired as much by abstract expressionism as by graffiti, his way of painting is extremely gestural, energetic; both technical and instinctive. On canvas, his compositions combine spray, acrylic, pencil... He speaks of his painting as a choreography of lines and traces. The color takes shape, the drawn frequencies set the rhythm and diffuse positive waves.

His painting is in perpetual evolution. Initially, he painted familiar faces, today the characters come out of his imagination. They even leap, for the first time, into interior landscapes inspired by the observation of nature. The movements are images recorded in his dancer's unconscious. All this is an emanation of what he is, of what he has seen, of what he has danced. There is something primitive and psychoanalytical in all this, as in the expressionist painting of Cy Twombly from the second half of the 20th century. Bust the Drip is in line with this American artistic movement.

Entered the gallery, his first solo-show took place in Paris in 2018.

Since then, he has had several exhibitions, participated in numerous events such as the Urban Art Fair, the first urban art fair in France, has been invited to numerous urban festivals in France and abroad, and has even made a mural for the Brilliant Minds event in Stockholm in 2019 whose guest of honor was Barack Obama. He intervened this year at Essec as part of their artist-in-residence invitations and was chosen as an “associate artist” by the committee for the 2024 Paris Olympic Games.