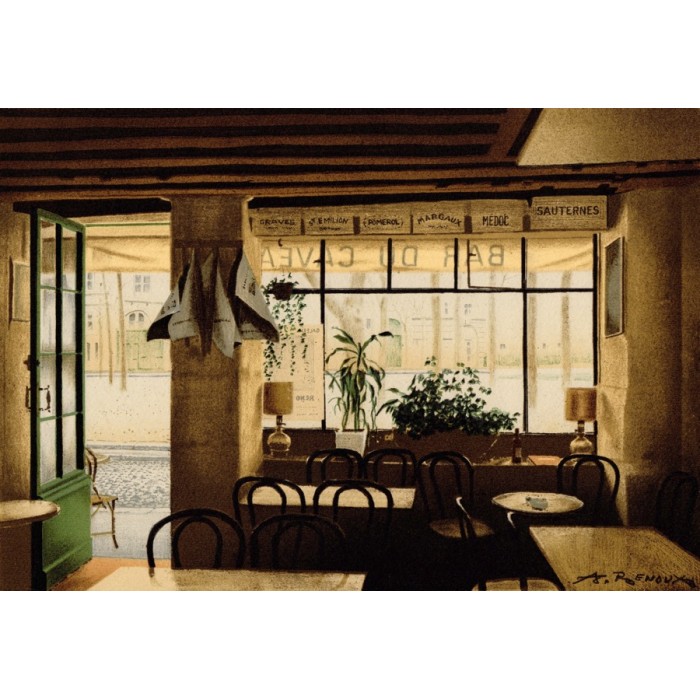 Original lithograph.
Signed in the plate, not numbered.
Size without margins: 22x32cm

born in Oran (Algeria) in 1939 and died in Paris in 2002, is a French painter, engraver and lithographer.
His works mostly represent Paris but also London, Venice, New York, Boston and San Francisco; he painted streets, shops, cafes, courtyards, old facades and restaurant interiors1. He himself called his painting “poetic reality”.

In 1945, his family from Provence left Algeria to settle in the south of France. His father is a winegrower. André Renoux began studying art in 1957 at the School of Decorative Arts in Nice, which he continued in Paris at the École supérieure des arts moderne. Very quickly he moved to Montmartre.
André Renoux is a keen observer of the smallest details, which he reproduces in his painting with meticulousness. His favorite subject is the streets of Paris. The theme of his paintings is never the animation of passers-by but the facades and storefronts themselves. They are the ones who tell Paris. His prowess is to manage to put in each of his works a perfume of timelessness, ideal, dream. His painting emanates an emotion of both charm and nostalgia. We feel the softness and benevolence of his gaze in each of his paintings.
Throughout his career, he has constantly presented his paintings each year in France and around the world. He has exhibited in Lebanon, Switzerland, Belgium, Germany, Brazil, Australia, Italy including many exhibitions in Rome, and in the United States (New York, Miami, Fort Lauderdale, Minneapolis, Palm Beach, Phoenix, San Francisco , Boston, Chicago, New Orleans…). He also met with immense success in Japan where a book was devoted to him. He has been the subject of articles in the New York Times, Arts news, Art in America, Art Businezz news, Art Review, a major Japanese review, and in numerous French newspapers.
André Roussard will have been his dealer for more than thirty years. Renoux's works entered large collections and the city of Paris paid tribute to him by exhibiting part of his works at the Carnavalet museum in 2010.