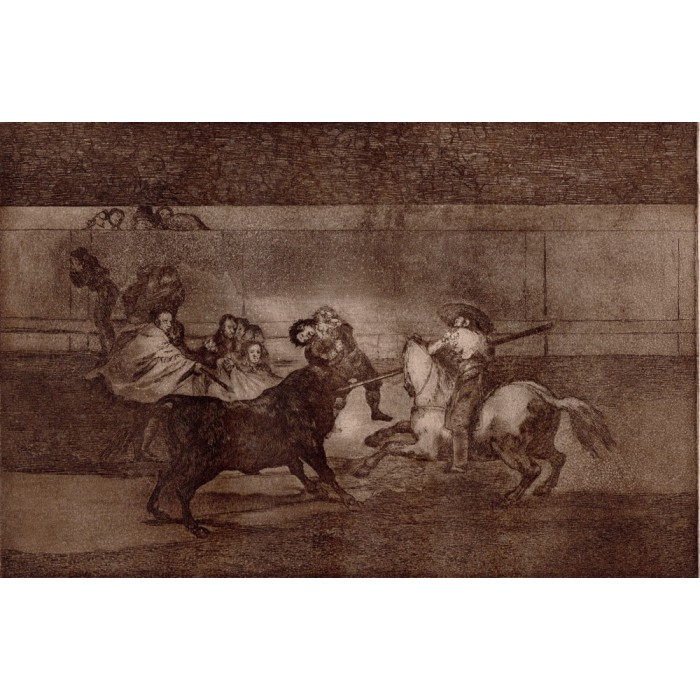 La tauromaquia (in French: La Tauromachie) by Francisco de Goya is a series of thirty-three etchings executed between 1815 and 1816, which retrace all the stages of the bullfight (corrida). This work follows the manual published by the bullfighter Pepe Hillo in 1796, which summarized the evolution of the art of bullfighting in Spain. A project that Goya himself had in mind since 1777, but which he implemented only very slowly. Begun in Spain, perhaps at the most turbulent and least known period of the artist's life, continued at the time of the invasion of Spain by the French army, it will be finished in France where Goya , tired of the civil war, the invasions, and the changes of regime, left his country at the age of 78 to take refuge in France in Bordeaux.

This print, rejected by Goya and not incorporated into the first edition of the Tauromachie of 1816, was added and published for the first time, with six others (AG), in the third edition of the series, drawn by Eugène Loizelet in Paris in 1876. It was preserved in later editions of Tauromachie.

A state proof is kept before the additional aquatint and another proof of the same condition stamped on the reverse of the previous proof. The two proofs, from the Carderera Collection, are kept at the National Library of Spain, Madrid (Inv. 45679). The plate of the stamp is kept in the National Calcography (nº 372), with the Palenque de los Moros made with donkeys to defend themselves from the embolado bull engraved on the obverse.

Following the order established by Loizelet in 1876, this is the third of three scenes (33, E and F) dedicated by Goya to the death of the bullfighter Pepe Illo in the bullring of Madrid on May 11, 1801, reflecting different moments in his deadly grip.

In this case, a moment a little later than that of the immediately preceding image is shown, titled The Death of Pepe Illo (Tauromaquia E) , since we see how the bull, after the initial gash in the bullfighter's thigh and his throwing into the air reflected in that one, has already pushed the right-hander through the stomach, a fatal wound of necessity which will be the one that actually causes death within twenty minutes of sustaining it.

We see that the bullfighter, while he is being emptied, holds the bull's horn in one hand, as if trying to run away, but he looks like a wimp.

Just in front of the bull there is a picador on horseback, also present in the previous photo, who sticks the pike in his neck to try to make him leave the right-handed man. J

Just behind the main group, we see several young men, already present in the previous engraving, goading the bull to free the torero.

In the background we guess a couple of characters holding their faces and turning their faces so as not to contemplate the spectacle, the barrier of the place and those lying with the public, who are not distinguished by being only sketched.

The only point of light in the scene is in the center of the composition and illuminates the picador, the injured bullfighter and some of the members of his gang who are trying to help him. In the print the grain of the aquatint is perfectly appreciated.

Beruete points out that the print has little chiaroscuro, is uniform and somewhat hazy, and lacks the general blotchy effect so common in the series. Lafuente Ferrari, for his part, interprets the engraving as a variant of La muerte de Pepe Illo (Tauromaquia E) with improved composition and lighting.

Gassier compares the preparatory drawing to the final engraving and points out that the pathos increases here, in the print, because of the number of figures it has and the final composition used in it, grouping the figures in the center of the scene. . Martínez-Novillo emphasizes the quality of the three engravings that relate the death of Pepe Illo. In fact, he considers that Goya was satisfied with the work done because he did not destroy his plates and signed them, although later he only included one in the first edition of Tauromachy. In his opinion, Goya ultimately chose to show the simplest view of Pepe Illo's death, which is why he chose The Unfortunate Death of Pepe Illo in Plaza de Madrid.

It should also be noted that Goya dedicated another stamp in Bullfighting to Pepe Illo, very different from the previous ones, as it emphasizes his great skills as a bullfighter, although it also alludes to his tendency towards bullfighting. recklessness: Pepe Illo cutting the bull.

Other artworks by the same artist: GOYA Francisco